Pros And Cons Of Swimming In Pool vs River vs Lake

When the summer heat’s coming, you’ll bet that everyone around you is running to the nearest pool of water. While there are people that live in more populated areas and those that don’t, there’s surely a body of water somewhere. Like most people, when we think about getting away from the summer heat, we’ll dive into a pool of water. For others, they might feel like diving into a river or lake instead. Is it better? We’re going to discuss the pros and cons of swimming in pools vs. rivers and lakes.

The Difference Between Rivers And Lakes

There’s a clear difference between rivers and lakes, and many people have the two confused because their terms are used synonymously with one another.

Here’s the difference: A lake is usually a still body of water that’s surrounded by land and usually surrounded from all sides. The only exception to this definition is if it’s being into by a river, stream, or other moving bodies of water. A river, on the other hand, is a natural flowing stream of water. The water that comes from a river usually derives from an ocean, sea, or lake. To illustrate, a river usually flows into a lake but a lake does not flow into a river. Furthermore, a river is not surrounded by land like a lake is.

Not everyone is able to afford a home and have a swimming pool in their own backyard but there are many benefits to swimming in monitored and sanitized waters instead of the natural waters that is given to us by nature. Here’s a list of some pros and cons:

Swimming in a pool by tradition, is incredibly clean, has much less diseases, and is much safer. Pools are usually sanitized and monitored by either the home owner or, if you’re swimming at a recreational center, then it is quality controlled by the facility. Pools are cleaned and sanitized with chlorine with a certain level of standard for cleanliness. The way they’re maintained eliminates the risk of diseases and is usually much safer than swimming in open water.

We do know that depending on the area that you’re living in, pools can be inaccessible. It can also be expensive especially if you have to pay membership dues in order to even use the facility in a recreational manner. On the top of that, although there’s usually lifeguards watching over swimmers, it can still be dangerous.

But to circle back around to the point, those are the pros and cons of swimming in a pool. The only real benefit of swimming in a river or lake, are: It’s free, you have complete freedom to do what you want, you feel liberated, you’re surrounded by nature. But aside from these benefits given to us by Mother-Nature, swimming in a pool is still the better choice. For one, there are always things lurking around in the waters and that isn’t just limited to animals or sea creatures. Natural bodies of water are usually home to thousands of tiny organisms naked to the eye, but it’s also a good breeding ground for parasites and diseases as well.

The Better Choice—Swimming In A Pool

There’s a certain attraction to the imagination when someone thinks about swimming in a natural body of water like a lake or river. And yes, there are people that usually loves Mother Nature so much, that all they want to do is swim with nature. However, when you weigh the pros and cons of doing so, instead of swimming in a pool, generally, the risks outweigh the benefits. The real question is, to help anyone make an informed decision, is: “Why to put yourself through the dangers of becoming sick or infected by parasites for something so second-handed like swimming?” Certainly, anyone that cares for their lives, will see that it’s simply not worth it. Swim in a pool instead and shelter yourself from any foreign diseases. 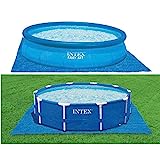 Intex Pool Ground Cloth for 8ft to 15ft Round Above Ground Pools
$39.97 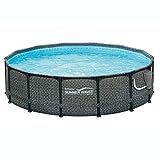 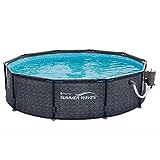 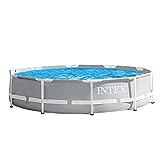